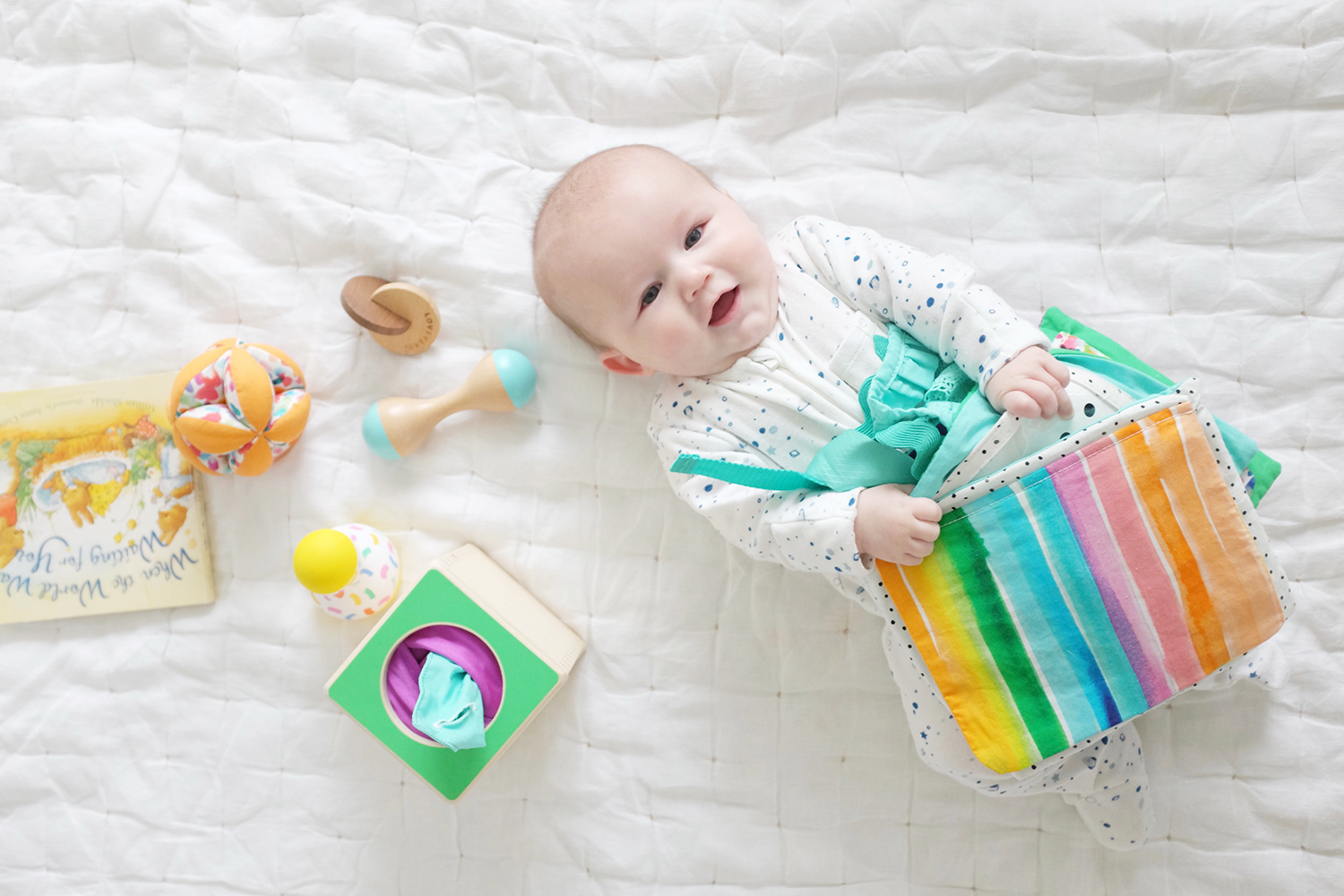 Finally! A post that has been requested and requested and I kept promising and it’s long overdue… and then I wrote it – and the internet deleted my draft. So now it’s a snowy afternoon in January and I sat my butt down to rewrite.

The (almost) full list HENRY’S TOYS and all the links directly to them.

I will say you will immediately notice a trend among the toys… not a lot that are battery operated. Actually, I think we now own three that are battery operated… two were Christmas gifts, and I have to say, Henry likes them – but he engages for much longer periods (and independently!) with his “passive” toys. We actually just ran an article on The Everymom about the best toys for baby development and the answer is… shocker. Toys that encourages a baby to get creative and play with it; not the toys that play “at” them with flashing lights and songs. And we see it firsthand with Henry every day. He LOVES all his wooden toys and containers and things that zip that he can bang and mouth and stack and topple over. And throw. Hah

“When the toy is simple, a child is forced to be creative, dynamic and engaged on an entirely different level, which enables and promotes development. The more they have to use their brains and bodies to make something work, the more they will learn.” – The Everymom 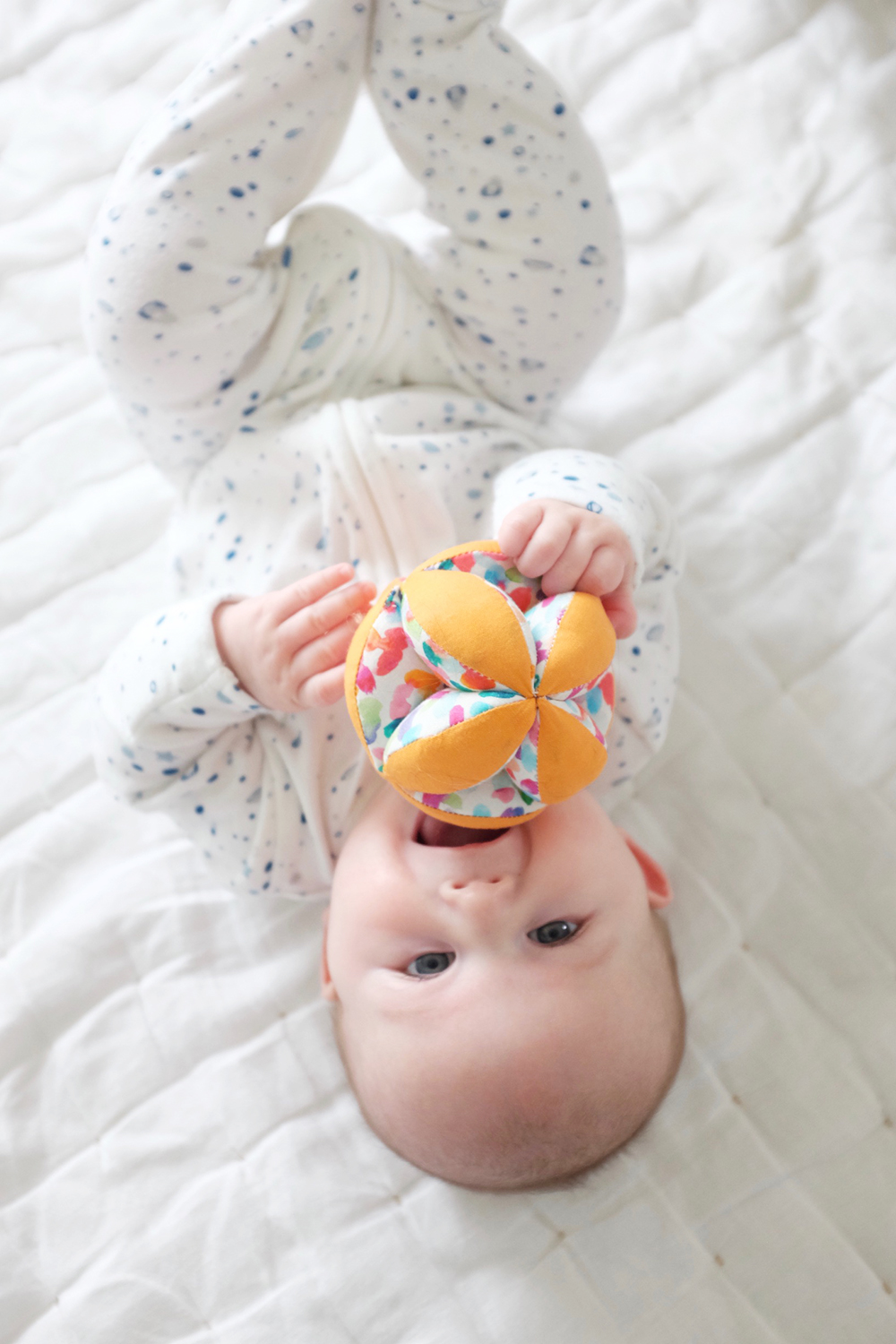 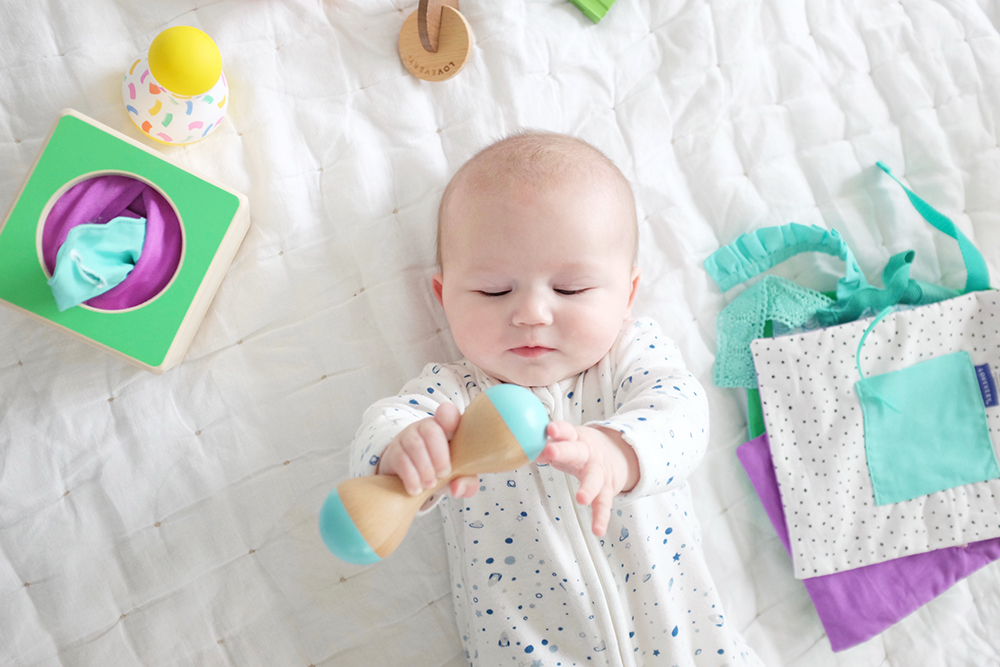 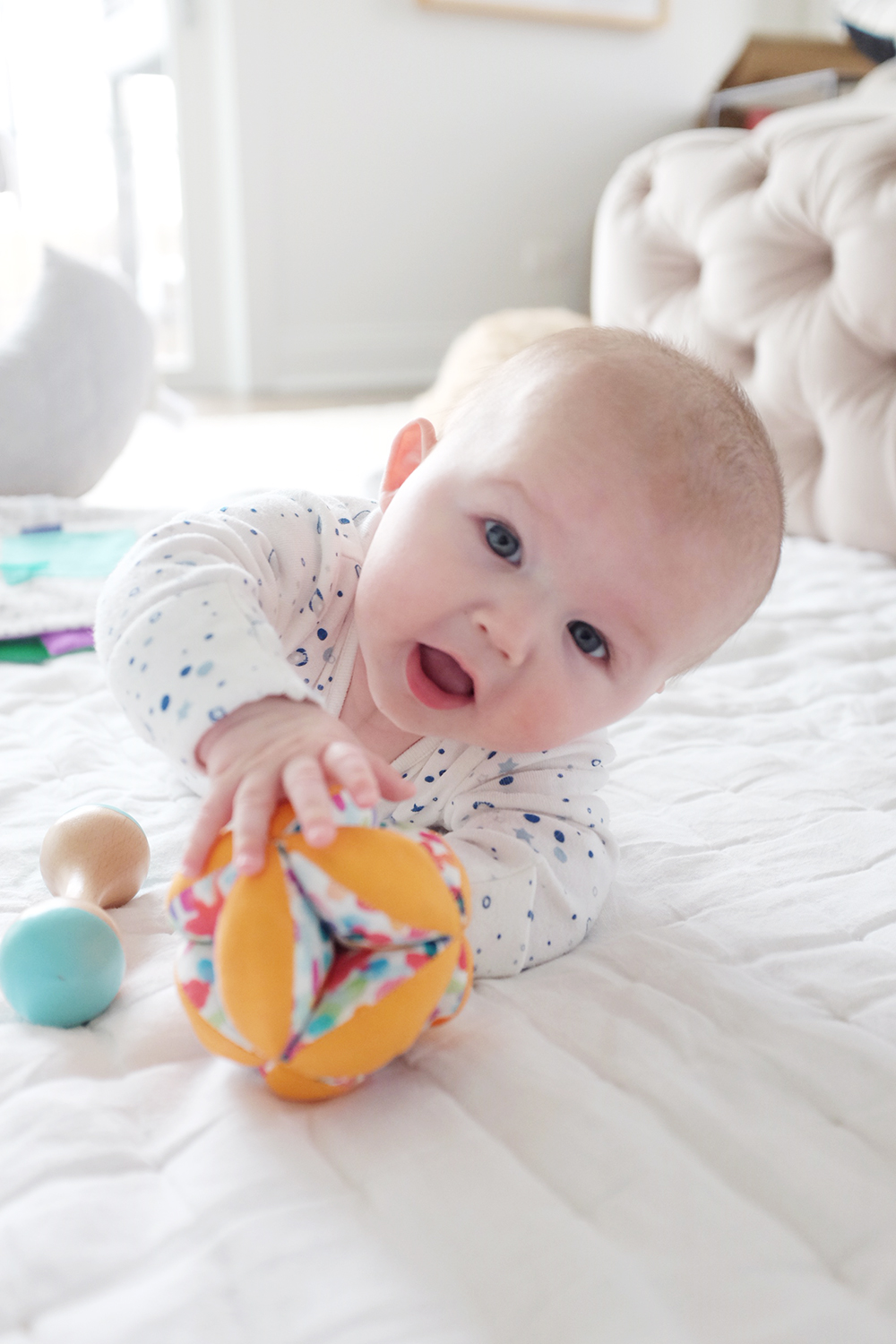 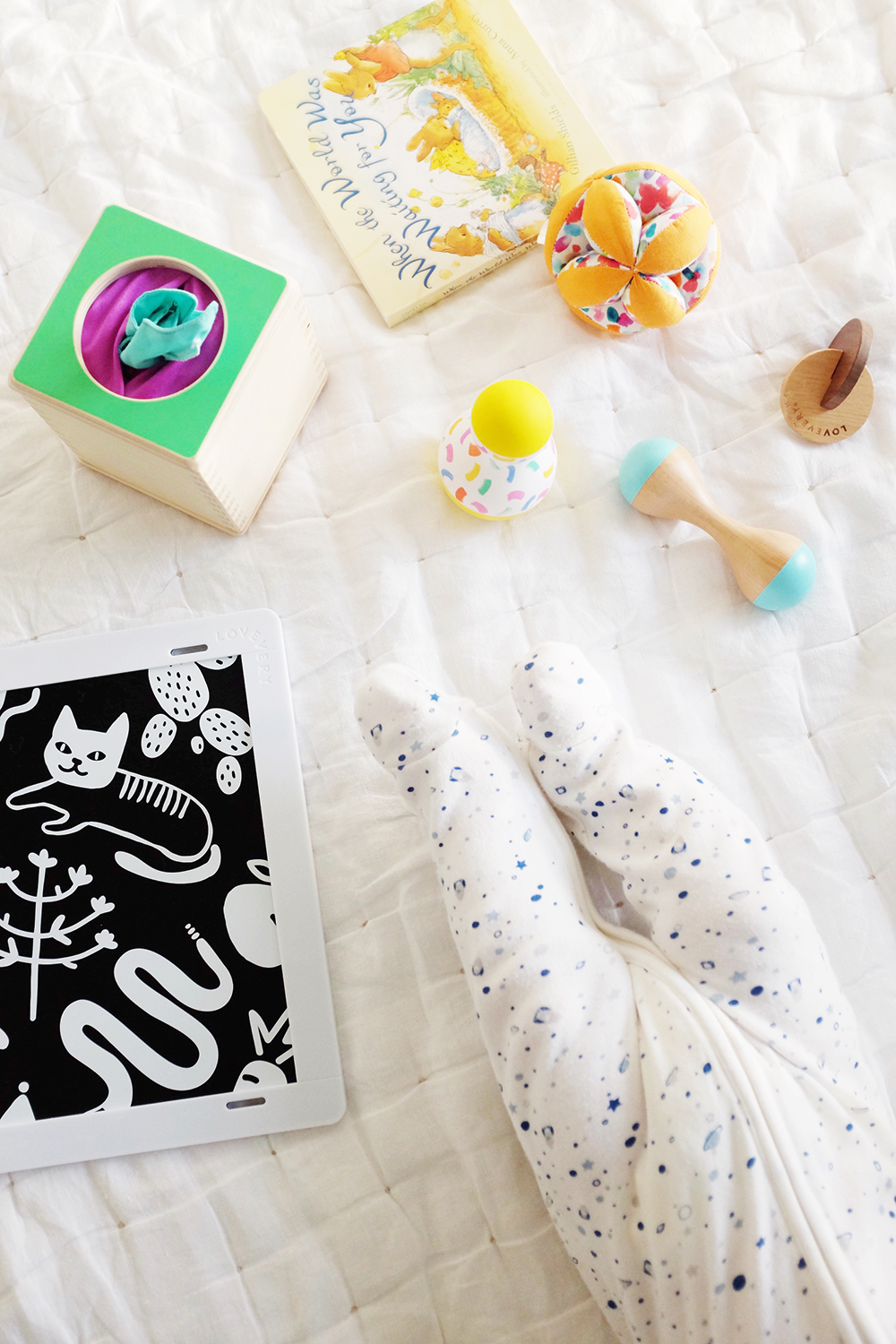 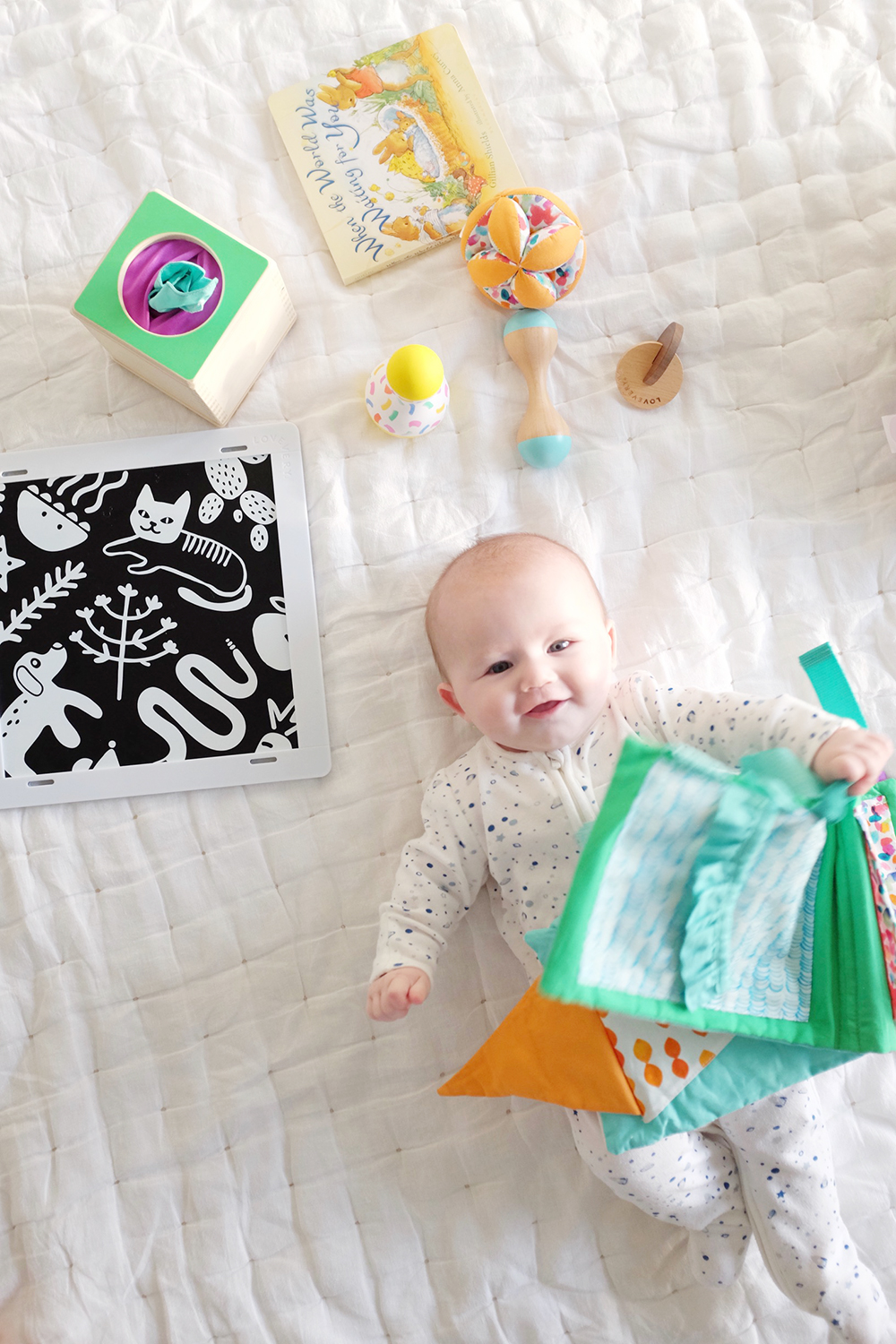 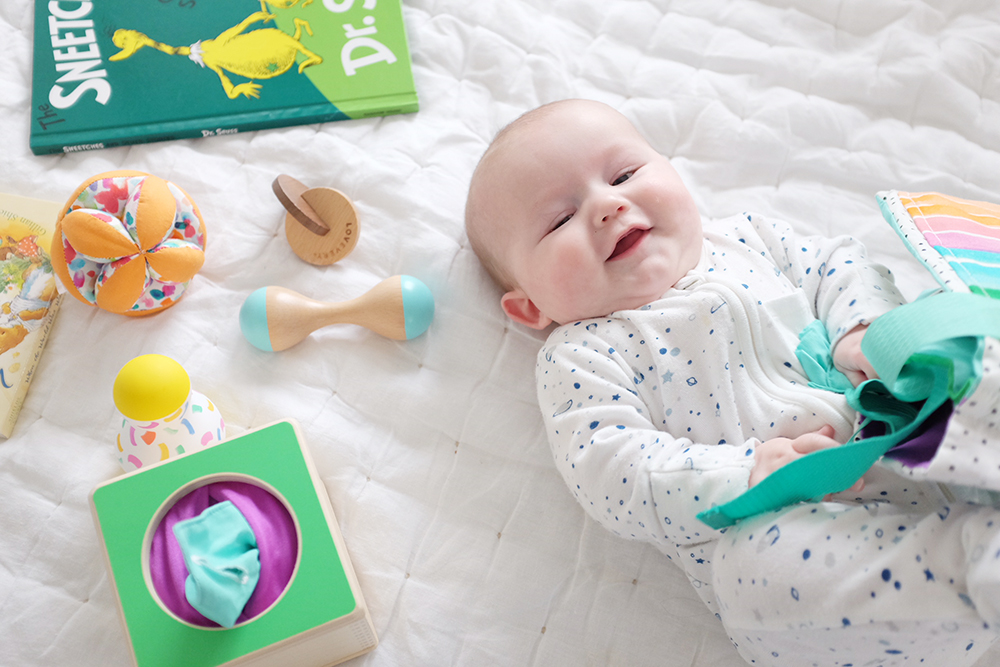 Henry’s pajamas are from Mori and our favorites.

Below is the full list of Henry’s favorite toys from year one.

So. I realize this might not look like much, but truly the bulk of the toys Henry uses are listed as #2 – it’s the subscription toy kits (save $10 if you use the links from my blog!) that get delivered every other month from Lovevery Baby (#2 below). The bimonthly kit includes a new set of toys geared specifically for his age and development. I’ve had a lot of you ask whether we like it… wholeheartedly the answer is yes. I explain more below.

We of course also have a number of teethers and books, and while it’s not technically a toy, he loooves his pacifiers.

The Lovevery Baby Playmat was on our registry and what we used almost exclusively for Henry’s tummy time those first few months! The mirrors and cards for him to look at were amazing, the dangling items engaged him, the soft padding of the mat was wonderful if he ever hit his noggin a little too hard on the floor when he rolled. We still have it but put it away once he started rolling around since he kept running into the bars and getting stuck (poor guy haha). Keep in mind the bars do detach but we wanted to get him a larger space to roll around on so we now use the quilt (#15 above) and spread all his toys out.

And NOW he can crawl. Once he is more purposeful and stronger in his moving around, however, I’m excited to set this back up with the canopy portion that makes it a tent/fort! It’s designed to grow and change with your babe as they develop through year one.

Ohhh how do I explain my love for this toy subscription service. Well, I cannot recommend these enough. They are brilliant, beautiful, engaging, and you can SEE your lil babe’s brain working and thinking as they interact with the toys. And Henry might to be interested in a toy one day, but a week or two later, he’s obsessed with it as he discovers it and learns how to interact with it. And then he might rediscover an old favorite in a new way. They provide the bulk of what Henry plays with every day – and keep him entertained the longest! He’s quite good at independent play – we can set him down with his toys in the morning and he’ll tinker around with them for anywhere from 15 to over 30 minutes! We actually have an article coming out on The Everymom about how these simple toys the baby is forced to interact with (as opposed to an electronic one that entertains them) are the best for their developing minds and creativity.

The kits also come with a book that outlines not only the key developmental milestones your baby should be meeting each month, but it outlines tips and ideas for how to play and interact with them and each of the toys to encourage where they’re at the process.

Any time I post a photo of Henry’s activity center I get a ton of questions about it – so here it is! In my opinion it’s the best looking activity center on the market by a landslide. The light wood and white tabletop are clean and appealing to leave out in a main living space – and the majority of the toys on top can be stowed away. The height is adjustable as they grow, plus it transitions to a cute playtable once the baby no longer needs an activity center.

That being said – said toys that come with it are detachable and are supposed to suction to the tabletop surface – but they do not at all. Henry can easily pull them off – and throw them – which is his favorite thing to do. This doesn’t bother me because I honestly like that he can manipulate the items, grab them, shake them, chew on them, and I like changing up what we can play with and the activity center isn’t always the same. But if toys on your floor bothers you, this one isn’t for you.

It also doesn’t have a ton of bounce if you’re looking for one that they can really getting bouncing in. The seat swivels around but very little bounce.

Henry went from not being much into his animals to LOVING his soft toys and cuddling them. He knows them all by name. We have the knit dolls from Cuddle & Kind, Blabla Dolls, and he loves his singing peekaboo elephant! Actually he’s enjoyed Elephant for a few months, but REALLY started laughing at and grabbing it just this week.

No Henry isn’t walking yet, but we asked for his walker for Christmas so we have it and he loves it – it’s encouraged him to crawl toward it! We’re big fans of Melissa & Doug wooden toys – the alligator teeth chomp when it moves which really engage him and he wants to crawl after it. And eventually will be walking!

I saw the Basket of Babies in a Diverse Toys for Children article on The Everymom and fell in love. The outfits are interchangeable and their little plush bodies are easy for him to handle.

This rainbow counting caterpillar was a shower gift and Henry’s played with this for months, obviously interacting with it in different ways… he likes dumping all the pieces off the body and banging them together and chewing on them. I use them to go over his colors every day and for counting! Now I take the pieces and put them in some of the containers that came in our Lovevery Baby kit and he has to figure out how to get them out. Such a great piece.

We have a couple of these simple shape puzzles from Melissa & Doug. Henry has not grasped the concept of putting it together but the simple pictures and shapes help teach him to recognize words… think these will really get a lot of use in the next year.

This was also a shower gift and we get a lot of use out of it since it actually DOES suction well – it’s small so we put it on his activity center, on the counter when he’s in his high chair, on the floor. He loves playing with the beads and we’ll get him a larger one when he’s older. Our new neighbor’s babe who is Henry’s age came up and loved this too – highly recommend!

Henry caught on to the stacking rings really early much to our surprise. It’s a great tool for dexterity and fine motor skills and while he doesn’t know to sort it by size just yet, we know that he’ll get there meaning this is a toy that will help him learn and develop over an extended period of time.

Another Christmas gift – so fun to dump all the pieces out and Henry interacts with them as he wishes. We use this the same way as the caterpillar for now – learning colors and shapes. Putting items into the container and taking them back out.

Henry graduated from his infant bath a month or two ago once he really got the hang of sitting up on his own, and when we started using the big tub, I immediately ordered these bath time boats, this kneeling pad and elbow rest, this non-slip bath mat, and this rubber duck thermometer. One or two of the Lovevery Baby kits also came with bath toys that he uses. Recommend it all!

This Montessori favorite was an early first birthday gift, and I’m so glad we got it when Henry was younger because he’s already started using it, leaning to climb and climb back down. My 4-year-old niece also loved playing on it which means its fun will last years!

We had a wooden box container from the Container Store and I quickly realized it was a hazard with it’s sharp corners… zoiks. I asked his aunts and uncles for two of these cute pom bins for Christmas in the small size to stow Henry’s toys. I got the small so they’re on his level – he can see into them, take the toys out, play with the poms, and heck – if he falls into them he won’t be hurt! Plus they’re cute enough to leave out, which we do in the family room. They come in larger sizes and also have white or pink options.

The white blanket Henry plays on is another item I frequently get asked about! It’s just a quilt from Serena and Lily! We lay this quilt on the rug in our family room and it’s basically Henry’s play zone. It gets folded up at the end of the day – and easily gets washed every week or if there’s ever a spit-up mess. We actually have the queen size quilt that we fold in half, but a mini version is also available!

We had A LOT of fun with this and it taught Henry concepts of hide and seek, reaching a destination, object permanence, etc. 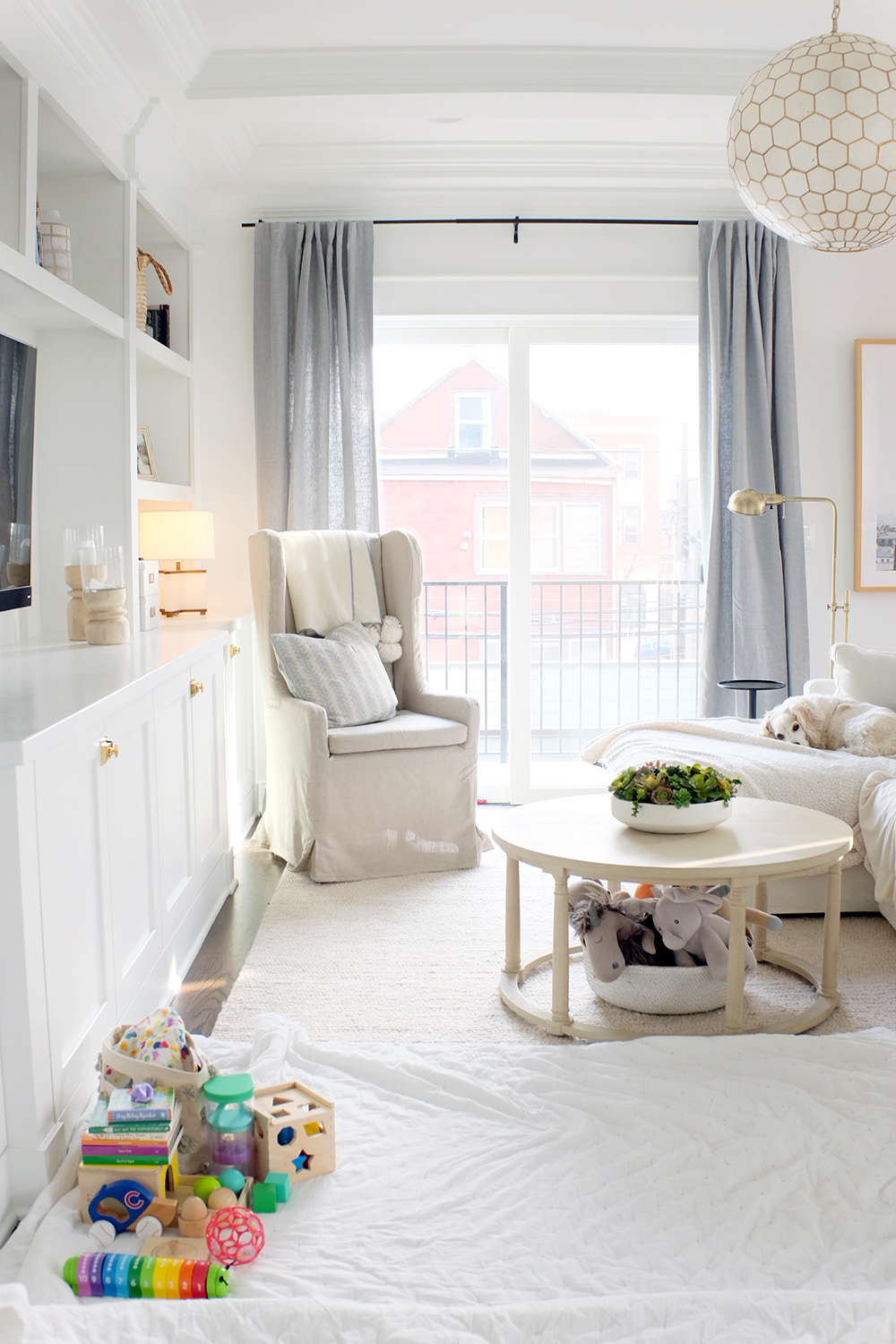 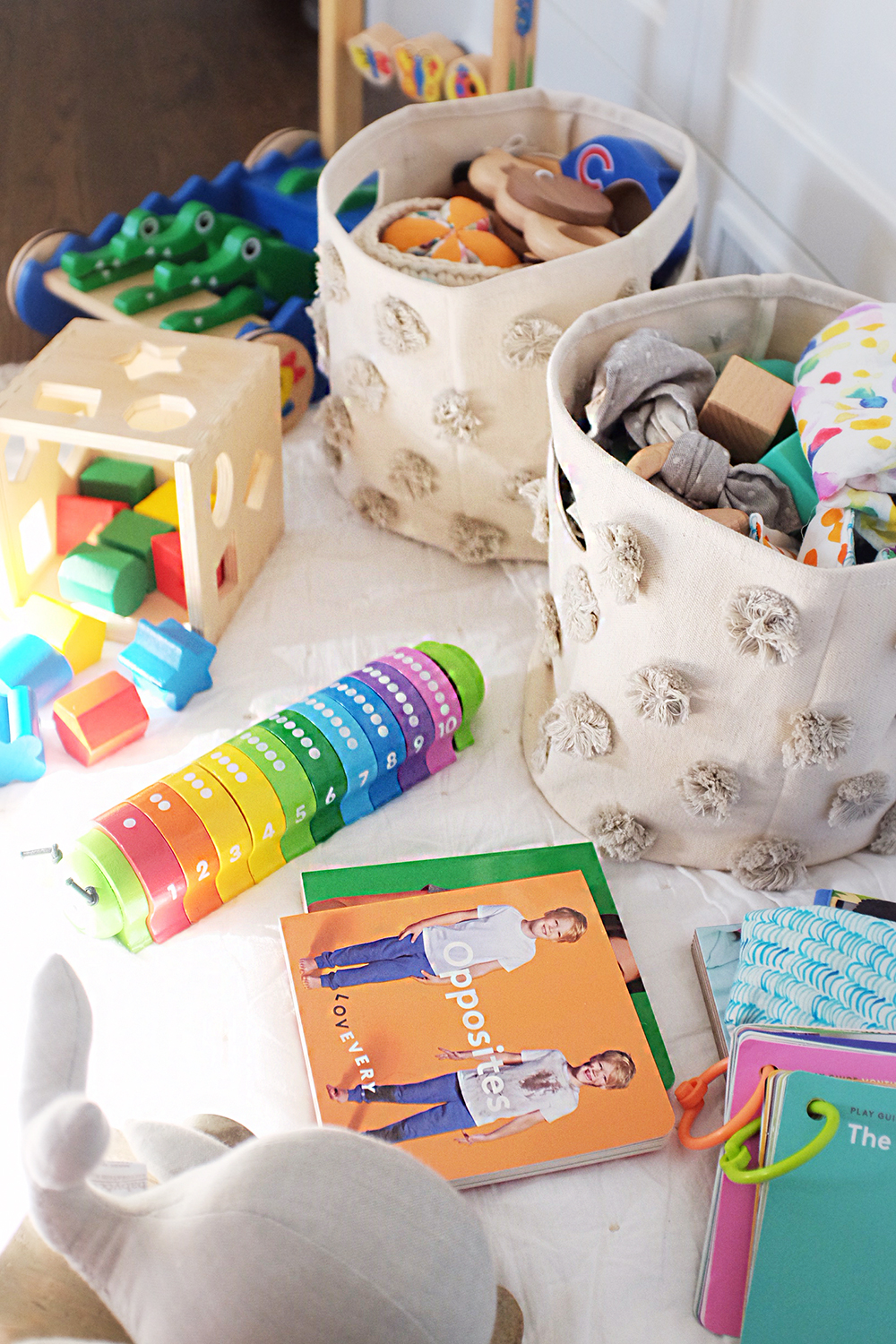 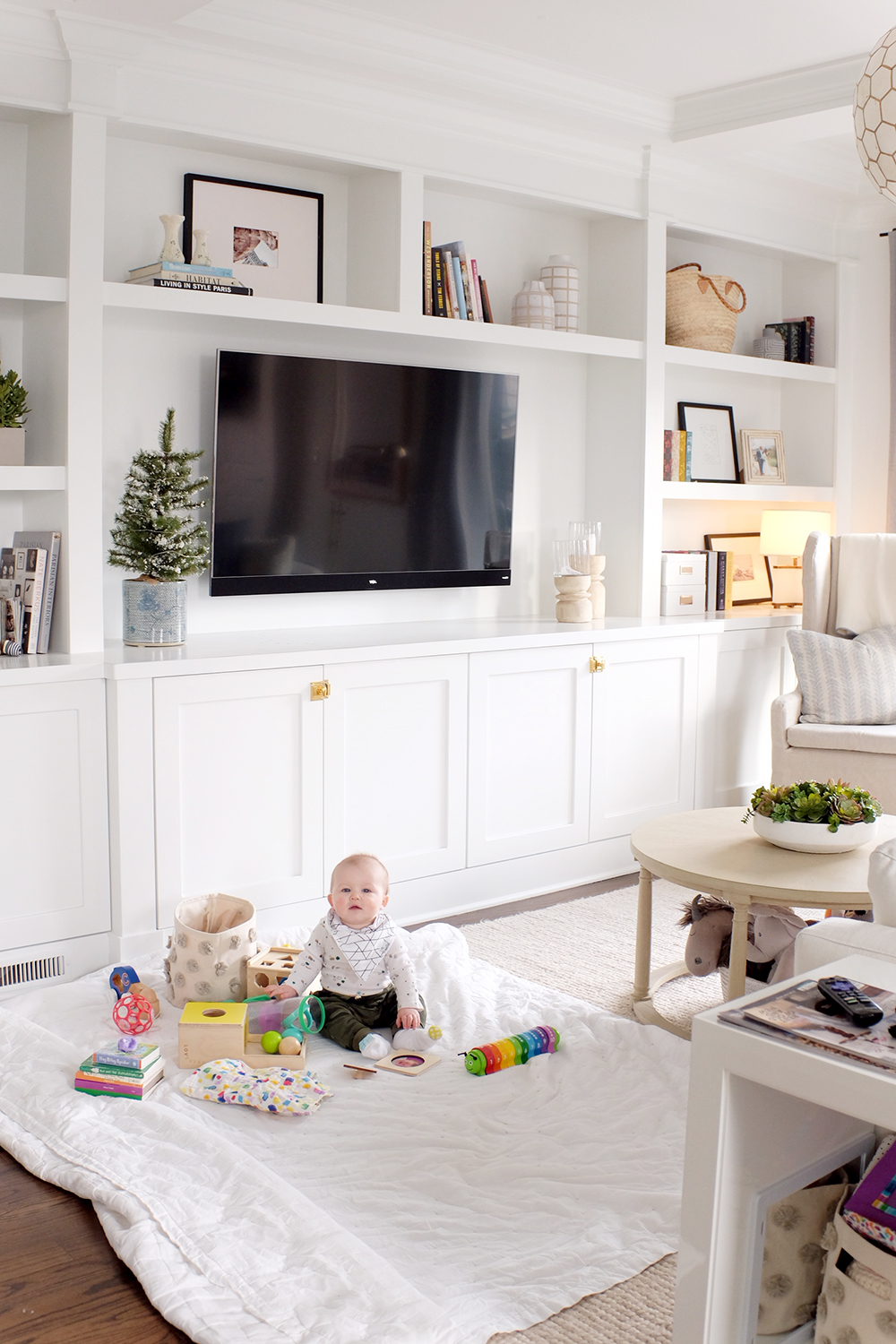 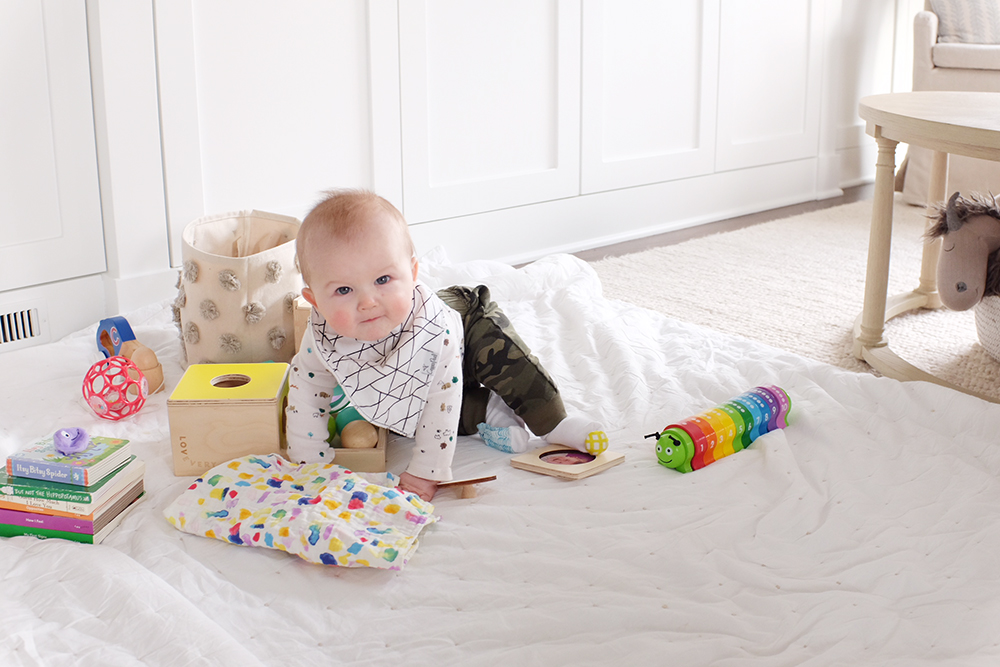 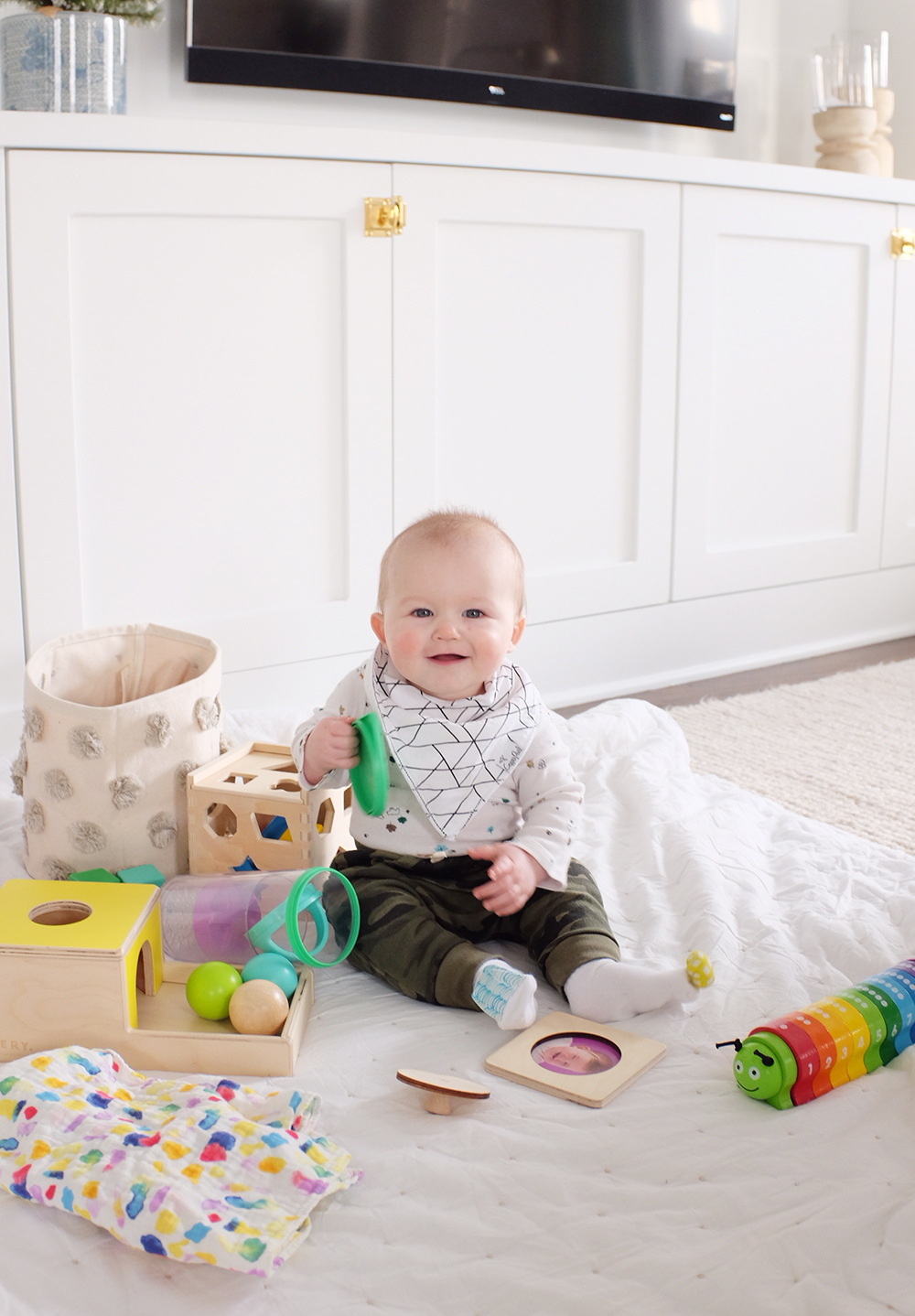 I shared Henry’s stacker on insta stories and have had a lot of people asking about it. It’s actually suggested for 1 year and up, and often times 18mos and up… so that is why I did not incldue it in year one toys. We had one from PBkids that is discontinued but these are similar:

YOU CAN SEE MORE OF OUR BABY ITEMS HERE:
Our Baby Registry

And in case there are any questions about the room: