I cannot believe my little Tucker Buck is 13 years old… and he has had quite the year. I know he isn’t on my page as often as he used to be since Henry and Charlie came around (and I swore I’d never be that pet parent), but I still get asked about him quite a bit, so I thought I’d give a brief update on how we’re keeping him happy and healthy in his later years. 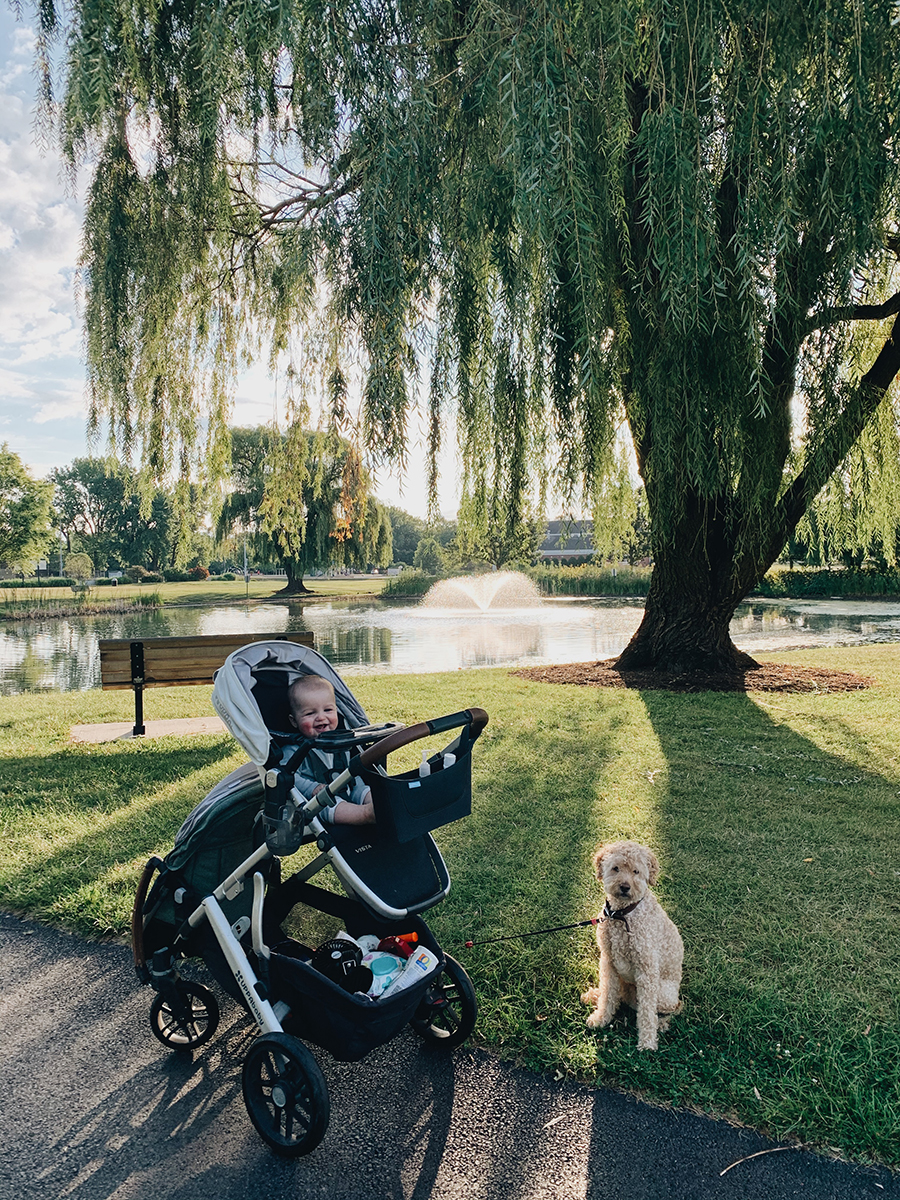 For those of you who don’t know, Tucker is a cockapoo and I got him going into my senior year of college when I was just 22-years-old. Ahh I cannot believe that. He’s been with me for so long. My entire adult life. He was such a fluffy cutie and so smart from the get-go. He potty-trained in two days using the bell method (which is when you hang bells on the door and teach them to use their nose to jingle the bells and alert you for a potty break). He traveled to Syracuse, New York to live out my final semester at school with me. And then we ventured down to DC for a year before moving back to Chicagoland (where we have since had 10 or so more homes and moves).

A year later, he and I moved back to Chicago and that’s when we got Fiona who was technically his half-sister. The two of them became best friends very quickly.

He has seen me through everything… notably college graduation and the post-college “what am I doing with my life” phase. He was by my side through my parents’ divorce which was especially difficult for me, multiple bad break-ups (also difficult), but he approved wholeheartedly when I found that special someone (Dan offered to take the dogs on a walk for me the first time he came over–something both Tucker and I appreciated right away), having my first child, and my second, saying goodbye to our beloved Fiona, long hours working at home and in the office, and so much more. 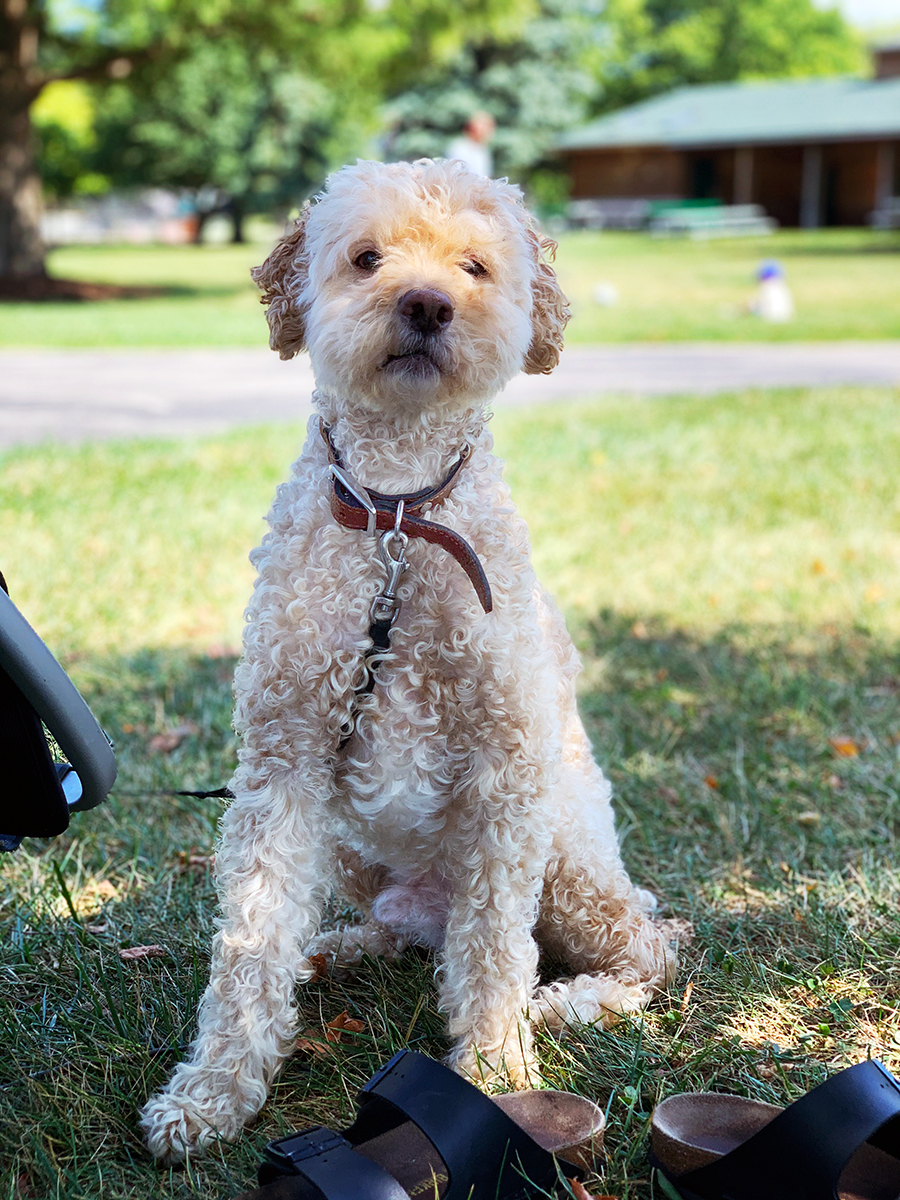 As I said, my ole’ boy is 13 years old, which is a senior age dog. But he’s spritely, and overall, the vets say Tucker is doing great health-wise. Still wants to play fetch and runs and jumps as good as ever!

He has mostly lost his hearing which we learned after we lost Fiona. It turns out Fiona could hear and was cueing him to things like the doorbell or someone new arriving or entering a room. We quickly realized he wouldn’t even hear us open the back door behind him when he was laying a few feet away on the sofa.

He absolutely loves all of the outdoor spaces our new home has to offer. We live next to a giant park and he gets to go on walks around it 1-3 times a day.

We had pretty much had stopped taking him to dog parks when we lived in the city since he wasn’t getting along with the younger dogs as much. Plus, I know it’s a lot easier for dogs to pick up illnesses when they’re around that many other dogs. According to a recent study by Elanco, at least one type of worm and/or intestinal parasite was present in 85% of the dog parks studied in the country–85%!!!–, and approximately one in five dogs were infected with worms (hookworm, whipworm, roundworm) or giardia (a common intestinal parasite). 20%. That is crazy. That means of the estimated 76 million pet dogs in the U.S., more
than 15 million could be unintentionally spreading worms or other intestinal parasites every day. Dogs excitedly meeting other dogs just got a lot scarier, amirite? I’ve always given both of my dogs vaccinations and preventative medicine* (like Interceptor to prevent heartworm), but it just wasn’t a risk worth adding as they got older.

*The one time my dogs brought fleas into the house, I was 7 months pregnant with Henry, and it was in March, which is typically winter in Chicago. I had always just done flea preventative in the summer months, but lesson learned. A good thaw and the fleas come out to play. Oof that wasn’t fun.

2. Daily walks around the park

3. Free time in the backyard–he’s allowed to roam in by himself, and he always comes back up on his own and let’s us know he’s done, it’s adorable

4. Regular grooming and baths–this is also to help minimize dander for Charlie

5. Teaching him signaling since he is losing his hearing

6. Fetch as often as possible

Truly, I was just on a walk with Tuck, and someone asked me about my cute puppy. They were shocked when I said he was 13. Like I said–spritely! 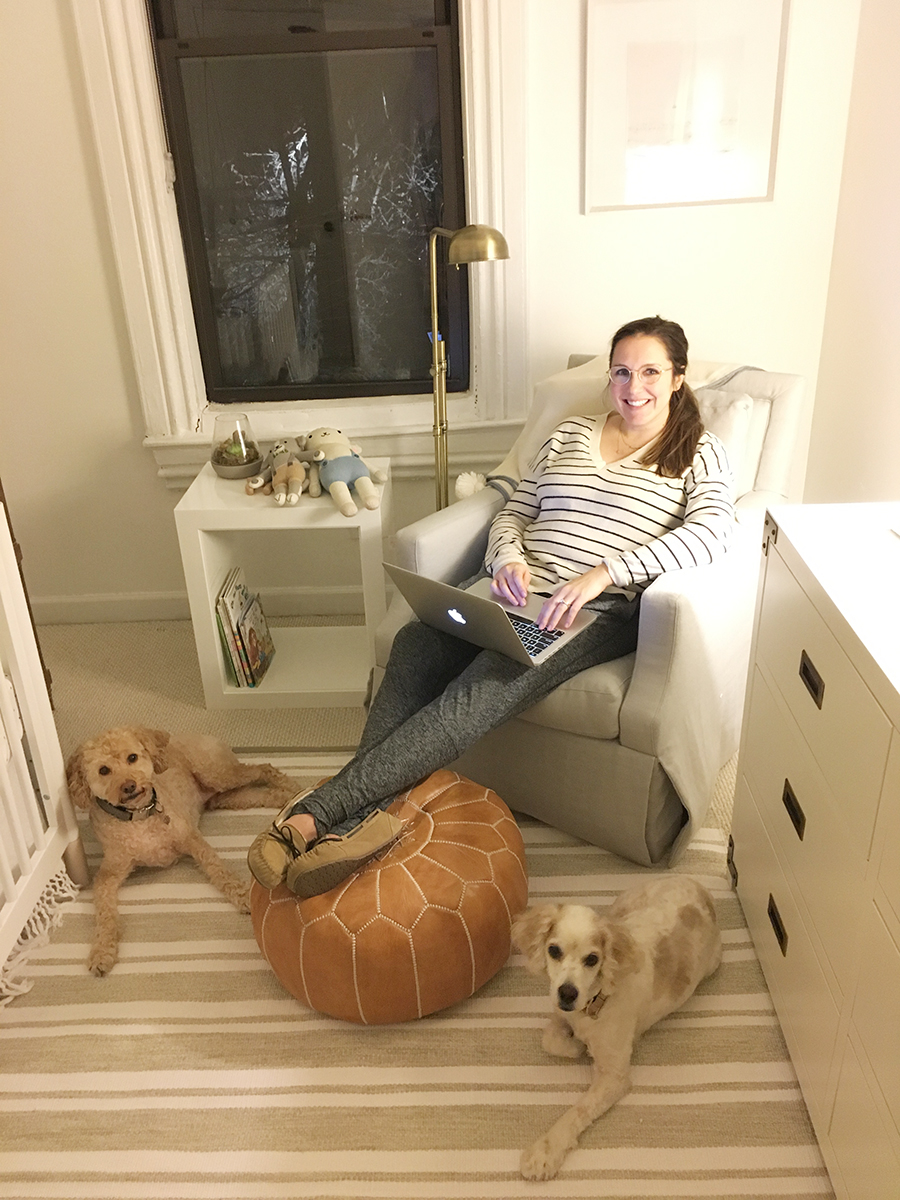 I have gotten a lot of questions about introducing babies and the dog. We did the thing where a family member took a baby blanket to him to introduce the smell. But overall he was pretty indifferent toward the babies in general. I will say he adjusted pretty well to having two babies brought into our home in the last two years–a huge adjustment to any pet. 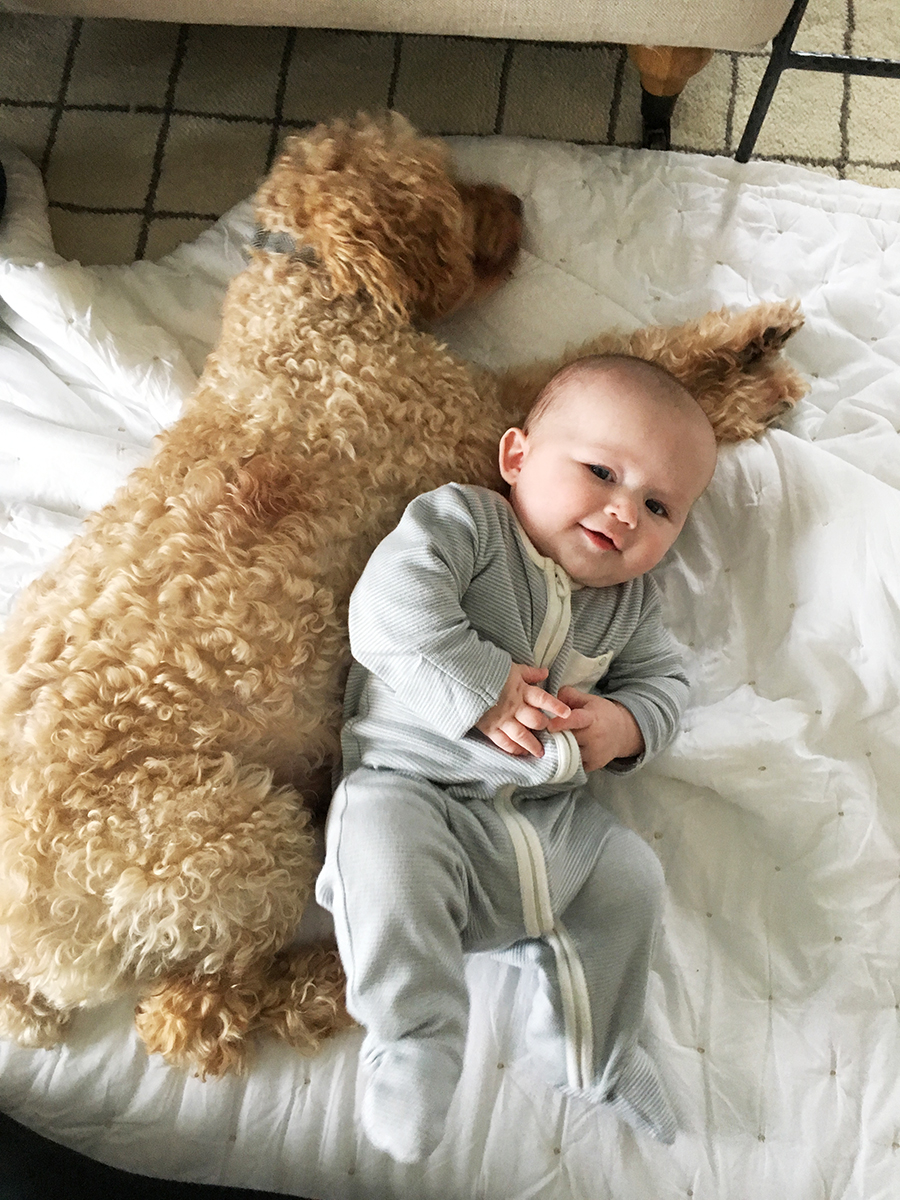 We did have one incident when Henry was in the crawling phase and Henry used Tuck’s body to try and pull himself up, grabbing and pinching his skin. I am sure there are a lot of docile dogs who would not have minded, but it startled and hurt Tucker who then shot up and bit the top of Henry’s head (the super hard part so fortunately no skin broke). It was enough for us to never ever leave the dog and the babies in the same vicinity again. We always keep them fairly separated.

Oh, I should mention he is a BIG fan of the kids and all the treats he now gets as a result. If he sees me put Charlie in his high chair he knows it’s game on and he’s about to strike big with muffin crumbs, dropped crackers, spilt milk, anything. He is at the ready, and I think that helps nurture his love for the boys. Can’t blame him! 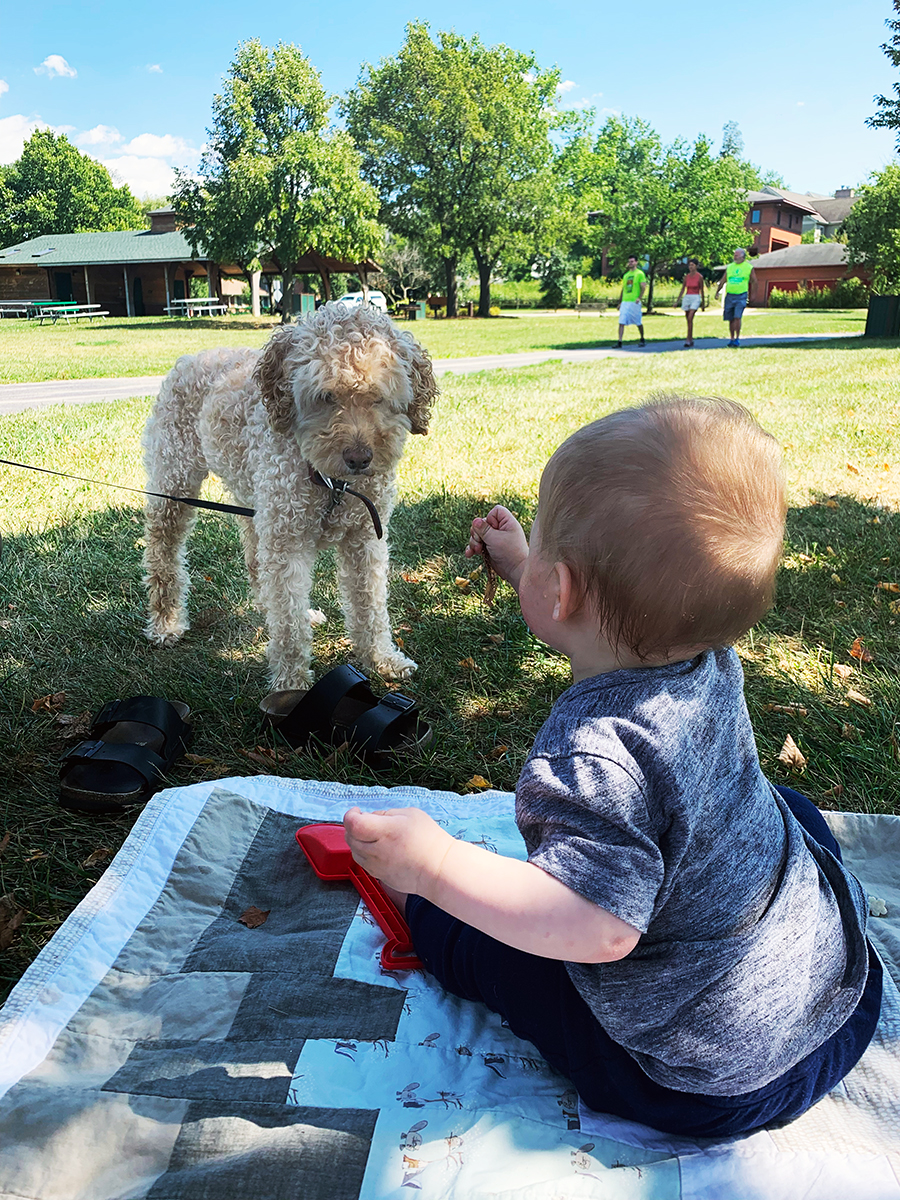 This past summer, we discovered Charlie’s eczema was likely caused by his allergy to dogs–i.e. Tucker. And Tucker is “hypoallergenic.” So at least it’s good that he doesn’t shed, but his dander is still on his saliva and when he lays on surfaces. We immediately did our best to keep them apart, and kept Charlie off soft surfaces Tucker goes on and Tucker off soft surfaces Charlies goes on. We also keep Tuck out of the kid spaces, notably the playroom, basement, and Charlie’s bedroom. It’s difficult because obviously Tucker doesn’t understand. He gets that he is not allowed in those rooms, but doesn’t know why, so he’ll just sit by the doorway for us to come back. Sad. I am usually in my room or office during the day working anyway, so Tucker will be with me, so that makes that easier. We heard from a lot of people that the exposure would be good for Charlie in the long run, and I am thrilled to say his eczema is dramatically better! Charlie was recently in his grandparents’ home with a shedding dog and didn’t have any kind of breakout or reaction! So yay! And of course, no shock to anyone, Charlie loves Tucker.

And as you all know, last year we said goodbye to Tucker’s best friend (and half-sister), Fiona, after she was diagnosed with a fast-spreading, aggressive cancer. That was such a sad moment having them say goodbye. Tuck was next to her the whole time. Oh gosh, I could cry thinking about it. I’m not sure if he ever seemed depressed afterward… I don’t think so really. We tried to keep him busy and he got so many extra cuddles from me in the weeks to follow, I think that helped. He’s just super attached to me now, which he always kind of was.

As you all know, we moved homes (again) back in May–something Tucker is well versed in but this time seems to have affected him a bit differently. I’ve heard it can be more difficult on older dogs, so I am so glad we will be here for a few years. He’s always been my shadow, but now he’s lost his hearing, so he has a difficult time finding me in the house. 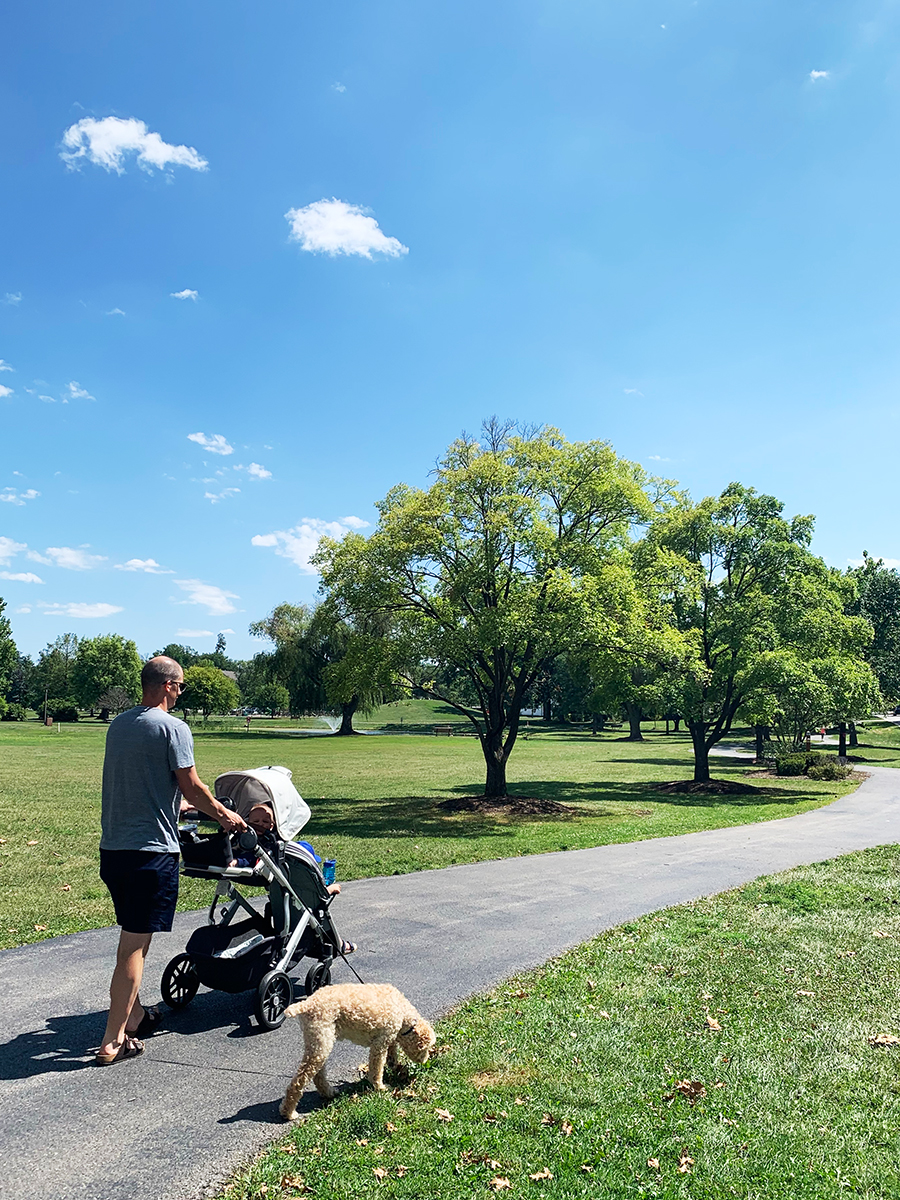 This year has been a rocky road for all of us in general with the pandemic and economic crisis. And for Tucker, I know he feels the stress… back in the spring we are around all of the time but working on our phones and computers and juggling caring for the kids meant Tucker wasn’t getting as much attention as I wanted to give him. 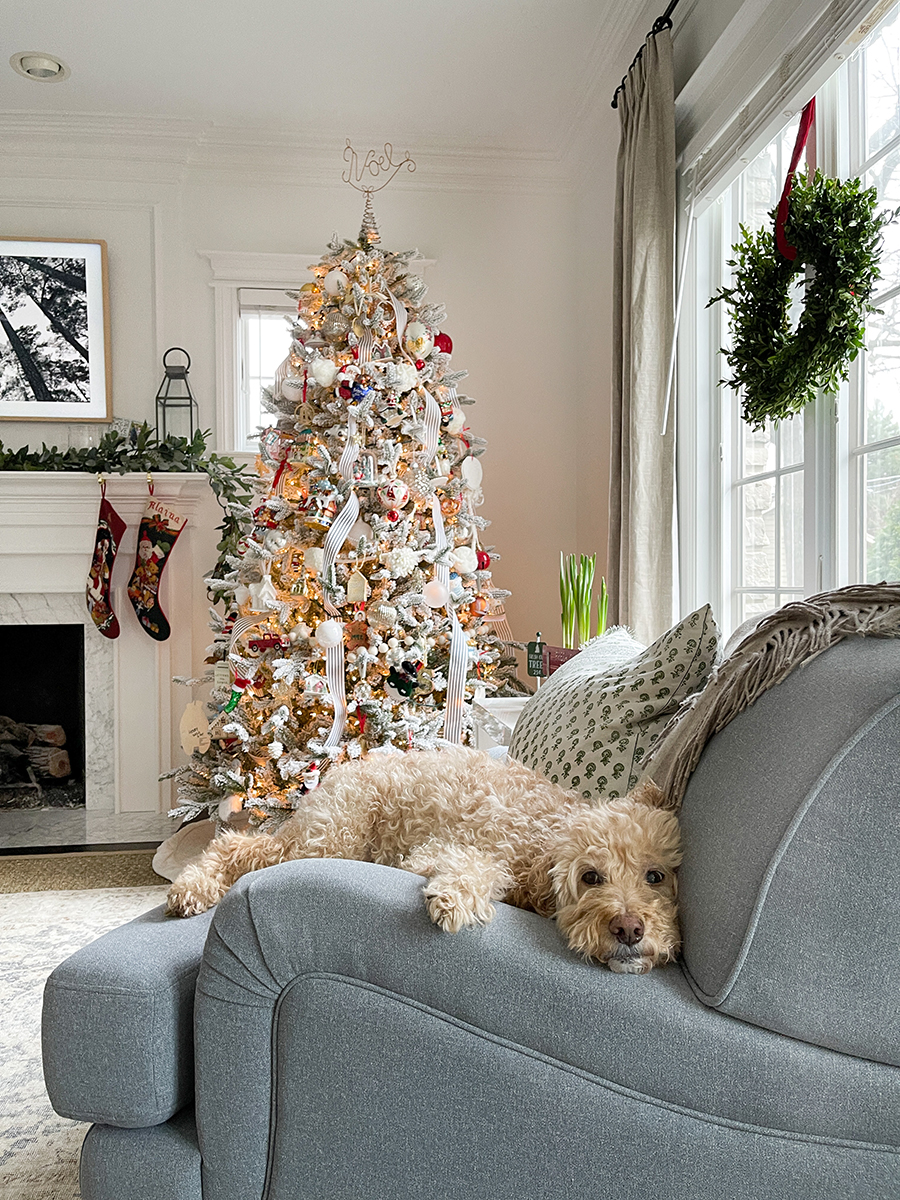 But he still gets to sleep next to me at night and lays by my feet most of the day as I work. And like I said, he’s loving the space and the park and all the time outdoors that he was lacking in the city. It’s too bad; we literally had a dog park at the end of our block when we lived downtown, but for the reasons I mentioned about the likeliness of dogs catching something like worms at those parks, we never took him. This new setup is working out a lot better for all of us.

*This post was in partnership with Elanco; thank you for supporting the partners who help make this blog possible!