Did you catch our gender reveal video?! I can’t believe almost 9,000 of you have! We included the footage of when we actually found out which I am so glad Dan thought to grab his phone and record. I also love that he agreed to sit down and do the reveal video with me.

WHERE WE’RE AT WITH THINGS

The nursery is 75% done. More on that below!

Registry is almost done. I admit I was super overwhelmed when we sat down to start, but once we made a few key decisions (stroller, car seat, baby rest thing (bouncer, etc.), it all started coming together quickly. I have several detailed posts on nursery and registry coming up soon!

We booked our babymoon. I’ll share where we’re going and what we’re doing in a post soon! But I need a bathing suit (yay sunshine and warmth!), ordered 7 from Shopbop and none of them could contain my ever-growing chest. #bigboobproblems magnified by pregnancy. Per many of your suggestions I ended up ordering this style from J.Crew, which is actually what I wore this summer, but I went up 1 and 2 sizes… we’ll see which one works!

Now my mind is focused on staying healthy, getting to the gym more to walk (this freezing single digit temps have had us SO cooped up), and waiting to see how big I get! I’d LIKE to jog but I get some mild cramping when I start jogging so of course that makes me nervous and I take it back down to a speed walk… wish I could swim but my gym doesn’t have a pool! 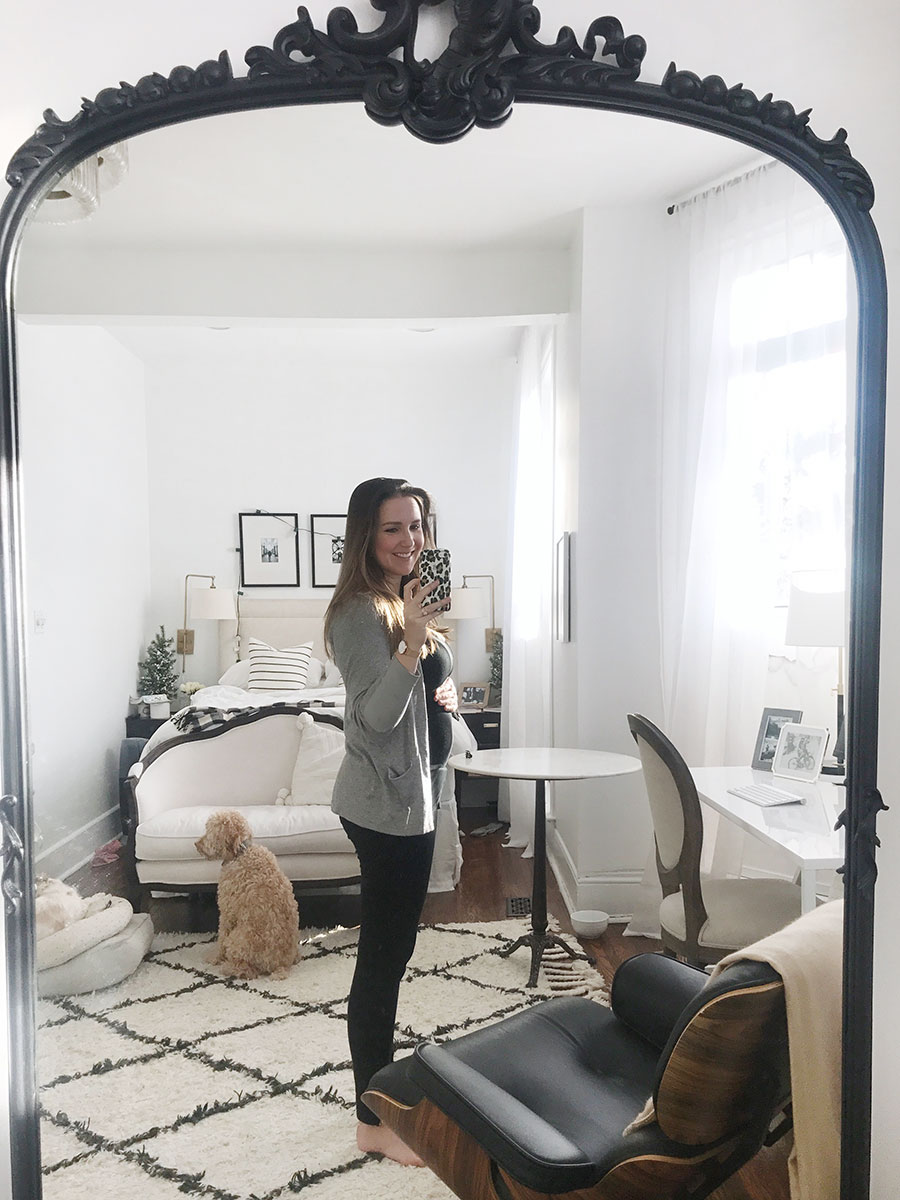 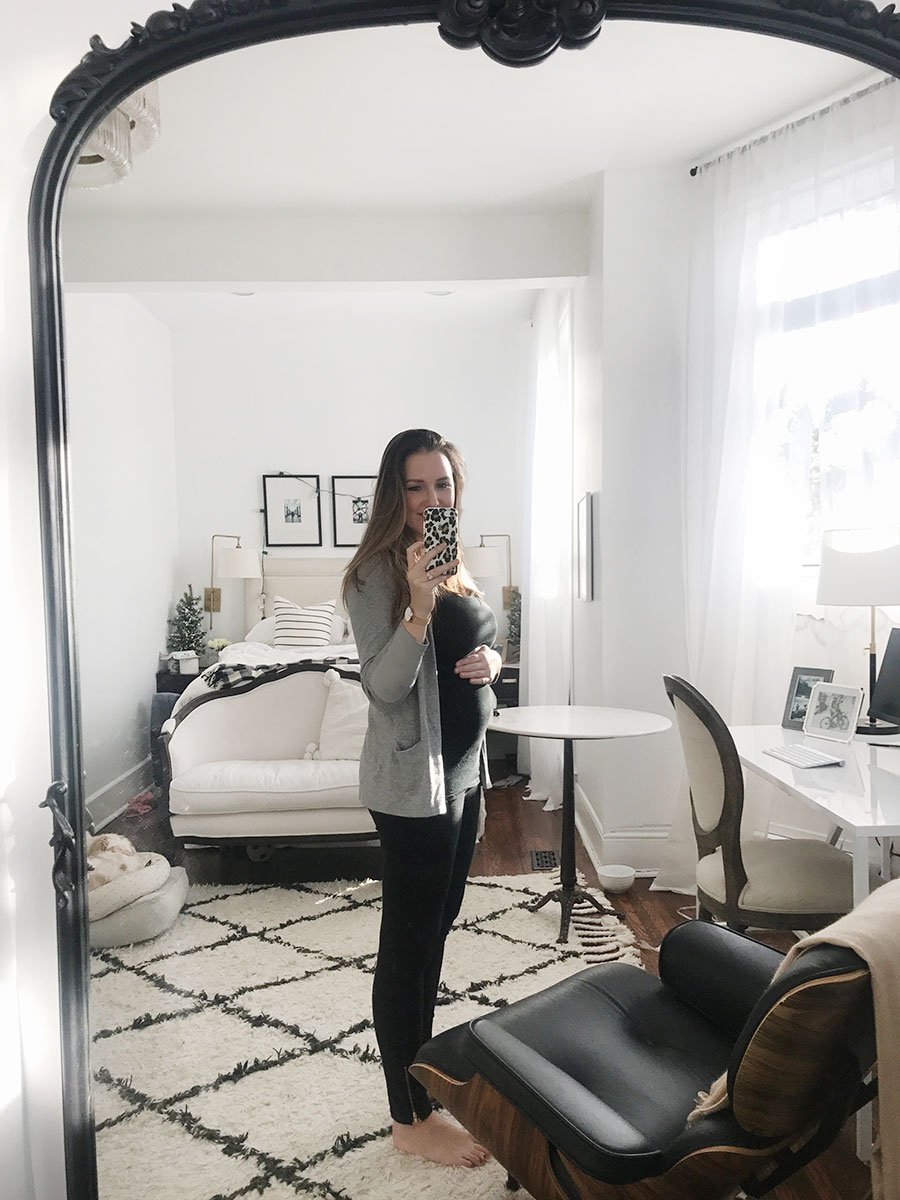 I believe the word is… popped? And I swear it happened overnight on Wednesday this week… so at 20.5 weeks.

The bump is definitely rounding out now! Still hidden in sweaters but clear as day in a fitted top.

We had our big 20 week appointment a few days early over the holiday break since we were there for a while. It all went well! Baby S is measuring in in the 61% size wise.

I feel movement like crazy – so much so that last night MY STOMACH MOVED. Like I clearly saw one side pop out when he kicked. Several times! It was so cool!

I was not expecting that to happen this early but I’m also not surprised because he is one active baby. I feel him all the time. Usually in 10-20-minute stints of when he’s awake and moving around. Dan’s been able to feel him for weeks also, but this bebe boy is just getting crazy strong and big.

Sleep is hit or miss. I mostly sleep ok but have had a few nights where I am restless for various reasons. And I am SUCH A BACK SLEEPER and you’re not apparently not supposed to sleep on your back? Even though I always start on my side, I inevitably wake up on my back.

I’m using pillows to prop up my upper body because apparently that helps with the circulation but does anyone know if this is really bad? I really don’t want to get one of those pregnancy pillows – they seem a little superfluous in the way of “extra stuff you don’t actually need.” But I don’t know. Going to ask my doctor. 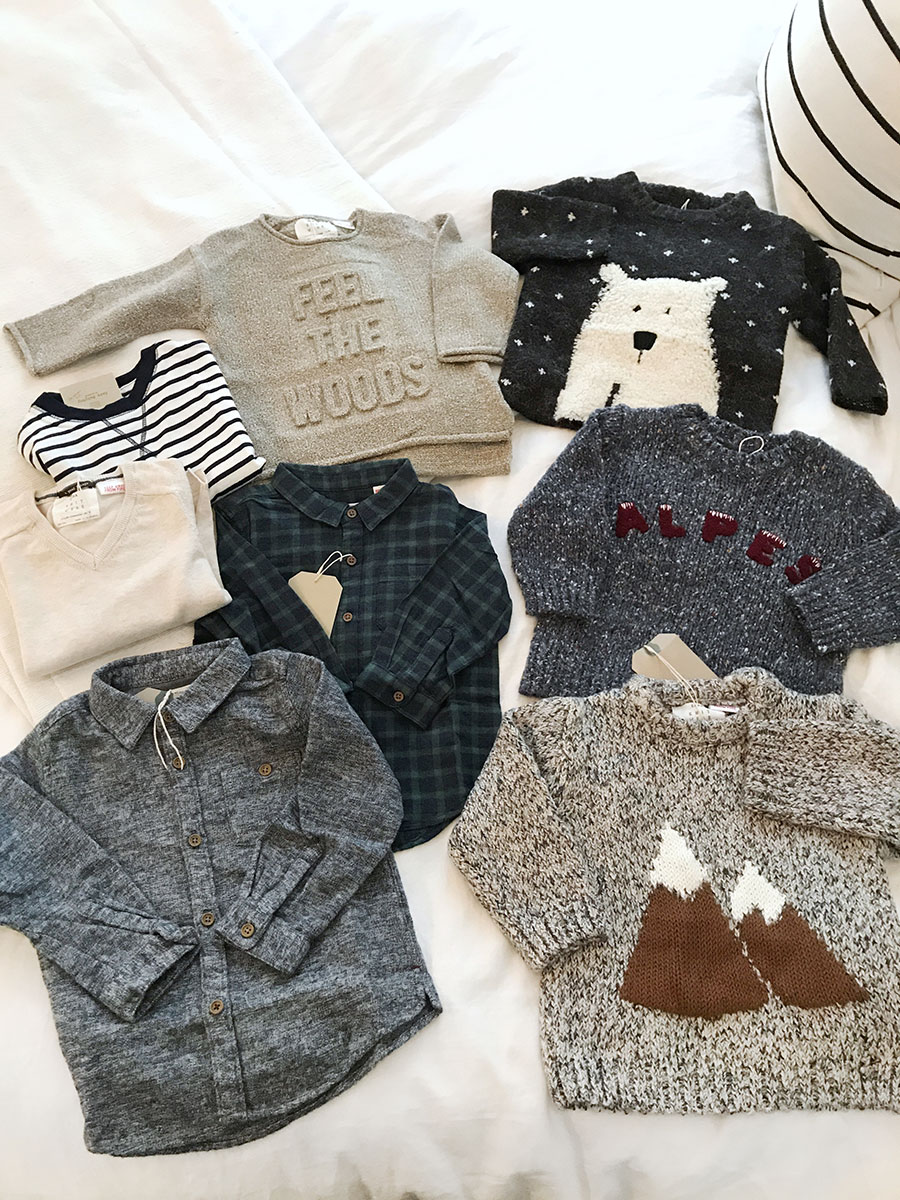 I may or may not have gone a little crazy at the Zara winter sale. How fantastic are these sweaters?!

It’s been so cold these past two weeks I figured I’d better stock up on cozy sweaters for baby boy’s first Chicago winter next year! For the prices $8-19, it was just a little too tempting.

A couple of weeks ago, I asked you all to vote on a crib. I was torn between two, and thought we settled on the one you all chose.

But you’ll never guess what…

We ended up ordering the previously unnamed option #3. 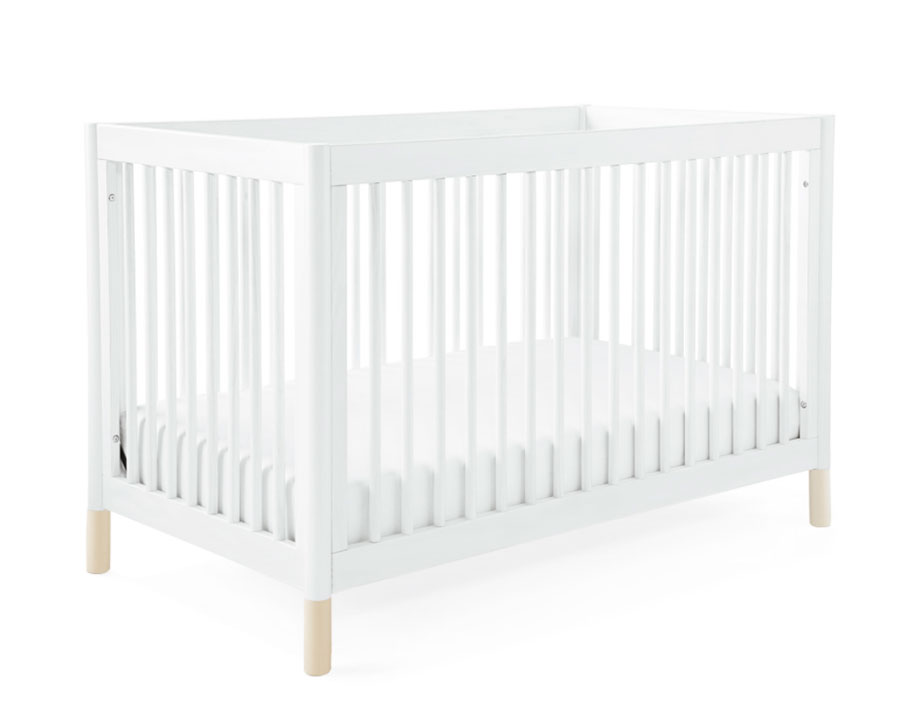 This is the third crib design that Serena & Lily offers (all of their beautiful cribs are under $400), and I always liked it originally but thought it wasn’t the right look for what I was pulling together. Then we ended up changing out a few items – different rug, mainly – and it completely changed the look.

So now there will be more light wood accents in the room to warm up all the grey and white, and this is the perfect piece to go with it. And it works for both genders, just like the nursery dresser. I’m SO excited. Obsessed, really. 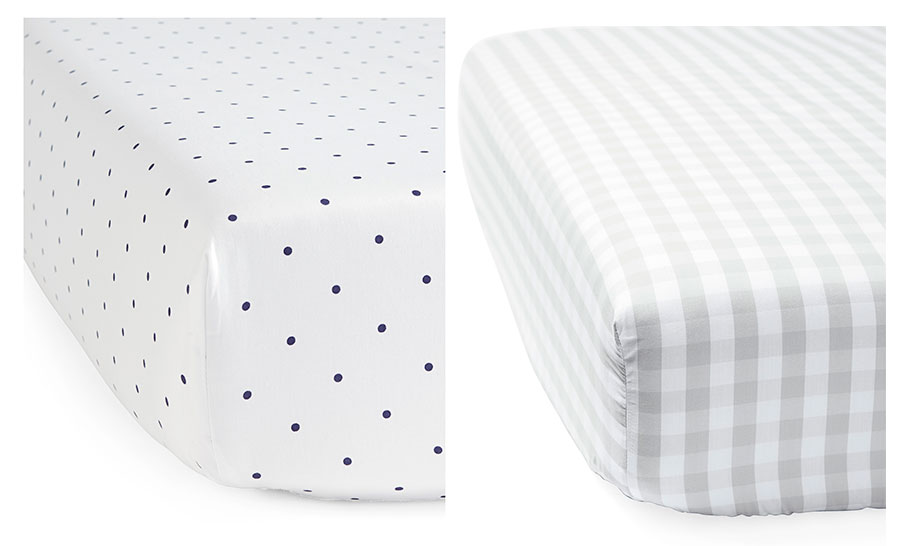 Above are two of the crib sheets we’ll be using with it. A navy pin dot and a grey gingham.

75% of the items are ordered and will be arriving in the next two weeks… cannot wait to show you as they start coming in! 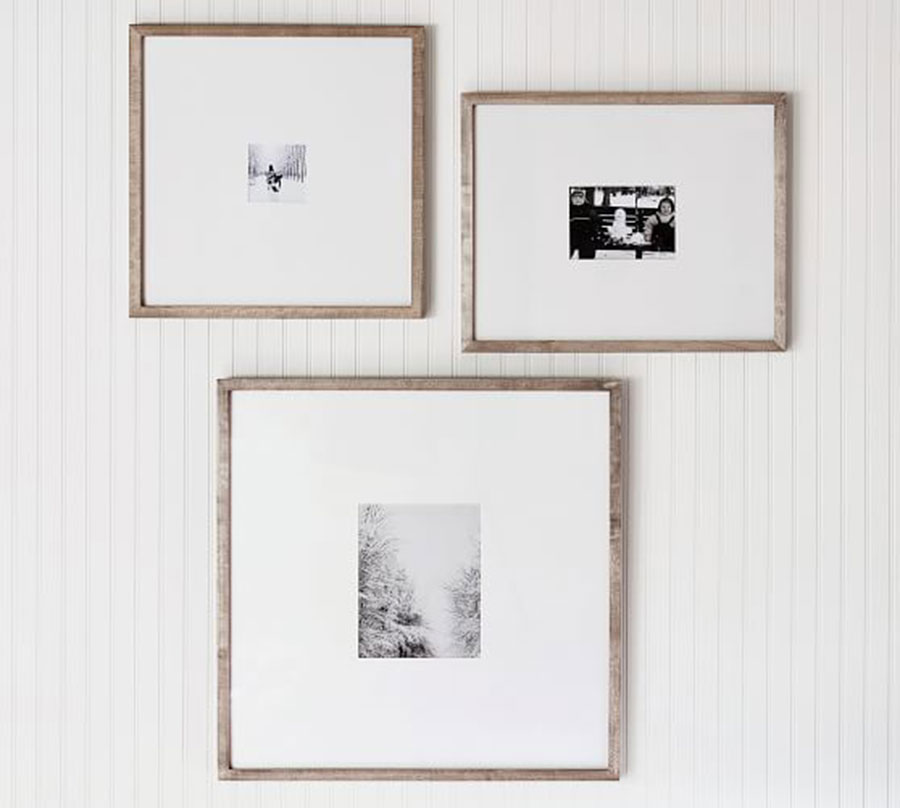 We still need to decide on:

So that’s that for 21 weeks! My next appointment isn’t until 24 weeks in February when we start the glucose testing. Trying to eat extra healthy this month after all the Christmas cookies…  will some of my favorite healthy recipes soon, as well! 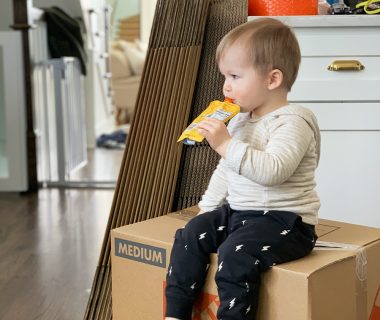 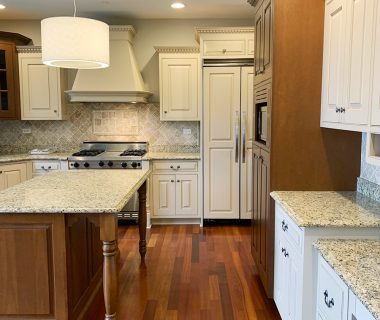 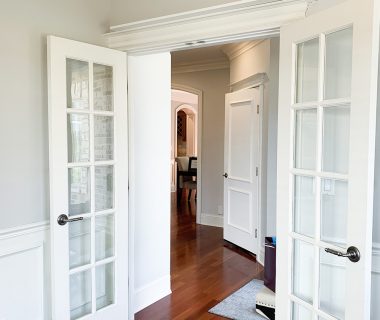